When CDTV launched, a commonly heard complaint from Amiga users was (and still is) that you can’t connect standard Amiga joysticks to the CDTV player. While it does have a joystick port on the back, the connector is different from the 9-pin D-Sub standard. However, as we will see, Commodore had thought of a solution to this problem early in the development process of CDTV in the form of a special brick shaped device…. that ultimately was never released. Or was it?

It has been referred to as “Two-Player IR interface” 1 or simply as “The Brick” in many early news articles and has been characterized as a brick shaped wireless device that allows you to connect standard Amiga joysticks for use with the CDTV player. The actual device that all these articles seem to portray is undoubtedly the Remote Joystick Controller that can be spotted in a photograph from the 1990 CDTV press kit. The photo was featured in several Amiga publications at the time 2 3. 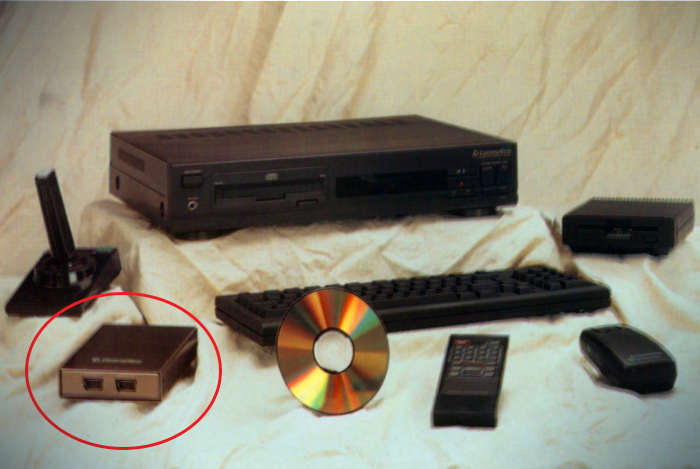 Just like the articles describe, the Remote Joystick Controller, or The Brick, as we will refer to it from now on, is what seems to be a wireless device to which you can connect two standard Amiga joysticks. The Brick can then be conveniently placed anywhere you want, like on the living room table, and will relay all your joystick movements wirelessly to the CDTV player using infrared light. It seems like an elegant solution to use standard Amiga joysticks, in keeping with the idea of the CDTV player as a wirelessly operated living room appliance.

But there’s another important aspect to The Brick. While it’s perfectly possible to play games with the standard CDTV remote controller, you can’t control (simultaneous) two-player games, because even if you have two remotes, the CDTV player won’t be able to differentiate between the two remote signals. The Brick would have solved this problem as it transmits distinct signals for each of the connected joysticks.

As is often the case with photos of early prototype hardware, it is not easy to determine whether The Brick was a functioning prototype or just some non-functional mock-up purely for demonstrational purposes. 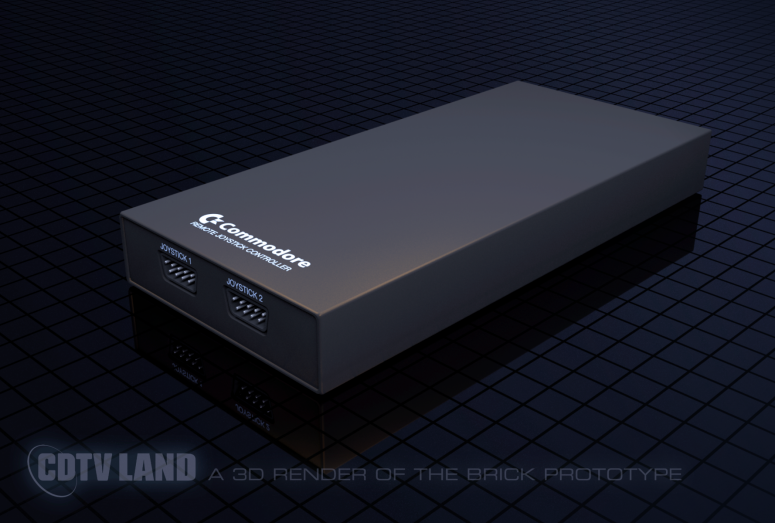 E.g. if we take a look at the other peripherals in the press kit photo, we see that the keyboard is not the CD-1221 production model, but clearly an A1000 keyboard, most likely just painted black (the key caps don’t even have any symbols on them). It also seems to have its detachable cord unplugged, probably to give the impression of a wireless device. The remote control looks like it’s a generic VCR remote thrown in for show. It has a button labeled TV/VCR, buttons for Channel Up/Down, and a Record button! Quite useless with a CD-ROM machine.

However, we cannot simply dismiss all the peripherals in the press kit photo as mock-ups either. The wireless mouse e.g. looks identical to the actual production model that was eventually released, except for the missing Commodore label. The disk drive also looks virtually the same as the production model CD-1411, although it might easily have been an A1011 diskdrive, that was painted black at this stage. But, that’s just the way things go when you’re scrambling to get your product to market and meet tradeshow deadlines.

CDTV was first shown officially to the press in June 1990 in a private area within the larger Commodore booth at the Summer CES (Consumer Electronics Show) in Chicago.4 Several CDTV players were set up for journalists to try out, as we can gather from photographs that were taken backstage. By the time CES rolled along, the demo setups looked a bit different than the one in the press kit photo: The Brick was a notable absentee! 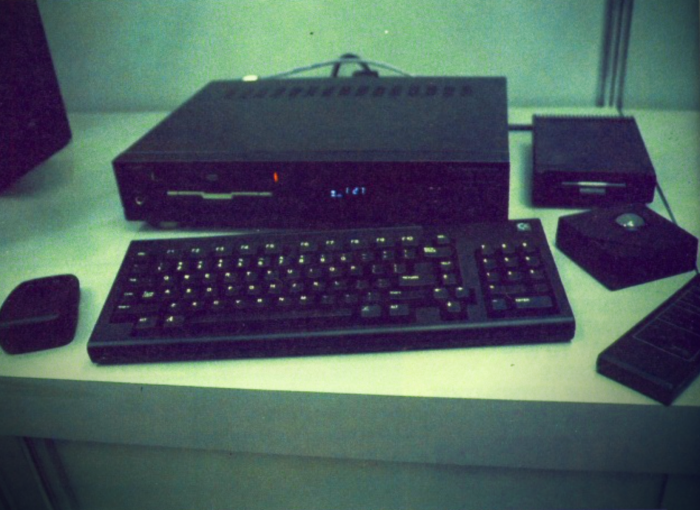 A possible explanation for The Brick’s absence might be the fact that Commodore were trying to position the CDTV player as an informational and educational device first, with entertainment only coming in second. Although it can be a perfectly fine gaming device (it was an Amiga, after all) Commodore were targeting the platform to adult consumers,6 and emphasizing the gaming aspect of the machine would not have fit that strategy particularly well. Note that the joystick from the press kit photo is also missing from the backstage demo setup. Both missing devices are gaming related.

But wait, there is another interesting thing to note in the demo setup (well, multiple things really, but we’ll get to those in a future article). It’s the appearance of a brand new input device that wasn’t featured in the press kit photos: a trackball controller!

A Merging of Ideas

Although the retail packaging of the CD1200 calls it a “Trackball Controller”, the actual text on the device itself says “CDTV Transmitter”, arguably to emphasize the fact that it’s not just a controller. 7 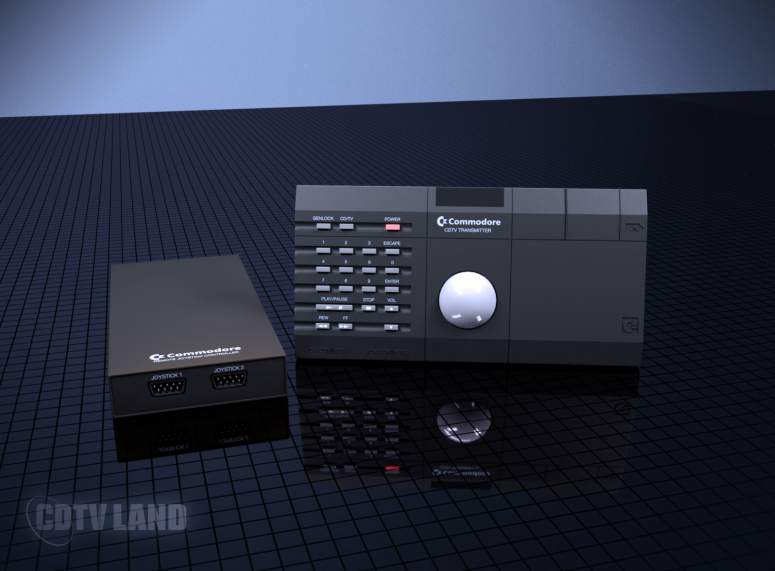 Its function as a trackball controller is evident from just looking at it, but what is not immediately apparent is the two joystick ports at the bottom of the device which allow the device to do exactly what The Brick would have done: wirelessly transmit joystick events to the CDTV player. 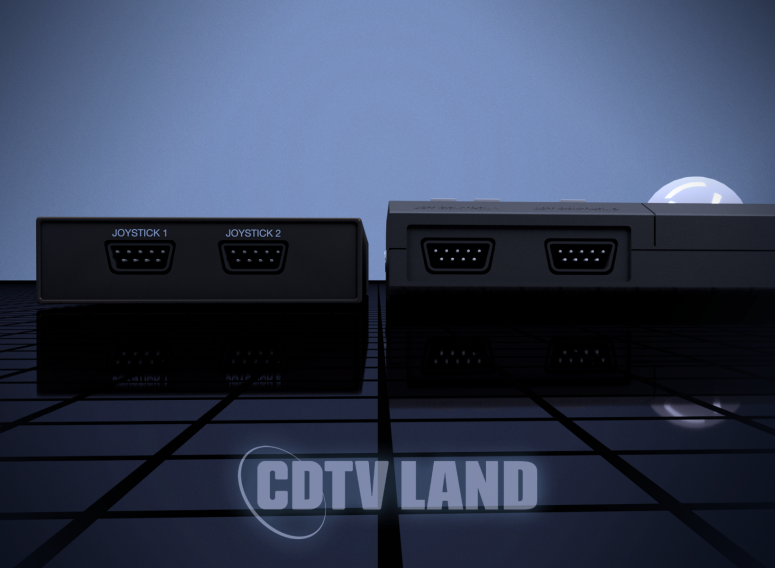 Joystick connectors on both devices

Eventually a couple of devices that allow you to use standard joysticks with the CDTV player did hit the market, but those are all third party products and none of them are wireless. One of these third party solutions is called The Brickette. I wonder what inspired the name… 🙂